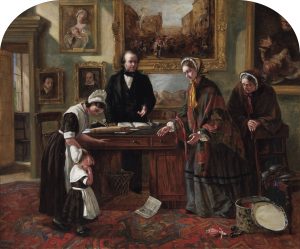 Emma Brownlow, The Foundling Restored to its Mother (detail), 1864 © Coram in the care of the Foundling Museum

I’m blazing, of course. As someone who has endured periods of separation from family and taught upset children, this whole notion of abandoned children is raw and sore as is the idea that only the rich and powerful can act to change these things. Charity sits uneasily in my mind and heart. We shouldn’t need charities to care for the weak and vulnerable, we should be acting as a compassionate society ourselves, then as now. So I tread the soft carpets with a stone in my heart, almost unwilling to be moved by the splendid artworks, by the respectability and pride of the benefactors.

Then we stand before the case of tokens that each parent, usually the mother, left to identify their child, along with a written record of the age of the child, its given name and date of admission. This is heart-breaking. Such scraps of identity – a piece of ribbon, a cheap broken brooch, a twist of silk – seem so fragile, resonant with longing. It’s so easy to succumb to sentimentality over these pieces. No doubt some of the parents were drunks, some prostitutes, all of them desperate for help, if not for themselves, then for their babies.

Move on. It’s a good history of good people at a time when to be fashionable meant spending money on more than clothes, horses and houses – philanthropy was a public duty. It’s an ill wind…

In the Committee Room I’m taken by one throwaway fact that our guide imparts – John Brownlow, a Secretary of the Foundling Hospital for many years, risen from a clerk’s position, had been a foundling himself. In the painting The Reunion he officiates over the handing back of a foundling to her mother – whatever can have been running through his mind at such ceremonies? Mysteriously, his own papers had disappeared – whether with his help or not, they are the only records known to be missing. When I drew my object for this project, it seemed a good sign that this painting was one of four painted by John Brownlow’s daughter, Emma, that came to me. The paintings are sentimental/idealised but because Emma was a constant presence at the Hospital, they are also full of detail as well as recording the display of various artworks by artists rather more famous than Emma herself.

Back in Scotland, I read the museum guide from cover to cover and examine the painting images and fact files sent from the museum.

I can’t get away from the image of John Brownlow presiding over the reunion ceremony and I begin to imagine the chatter he might have shared with Emma as she painted. With the discipline of 62 words to adhere to I’m going to have to follow my nose and focus on that.

I look at all four paintings but I keep going back to John Brownlow and wondering how a man who had been a foundling himself might feel, presiding over the reunion of a child with its mother. Would he repress feeling in true Victorian fashion, or, because he seems to have been a humane individual, would he have allowed his feelings to flow? We know that upon his death his wife did not want his own foundling history to be added to his memorial text. Was it a source of tension between them? How did his daughter feel?

I fill a pad with imaginary dialogue. John to his wife, his wife to his daughter, John to his daughter, and find an episode: the conversation between John and Emma. As she paints, it creates a huge thinking space for him, which brings up the tantalising question, what of his own mother?

The mother in the painting has obviously improved her circumstances – she is well-dressed and tidy, wears clean linen though no wedding ring. The child, who may have been wet-nursed then fostered before coming to the hospital, holds the hand of an attendant. She has endured two separations and is about to experience another. Of all the characters in the painting her feelings must be the most chaotic and apprehensive, standing as she does in a richly furnished and decorated room far from her daily environment in the classroom and workroom at the hospital.

And I was suddenly angry again, thinking of the current trend for ‘poverty porn’ – the relentless exposure of the poor and dispossessed to the TV camera in ‘documentaries’ that do anything but document the innermost thoughts and feelings of their subjects. Can this small child in the painting tell us something about powerlessness now as then? Benevolence is a bit of a curate’s egg as a virtue when the giver is gaining so much more than the receiver. I can just about remember my own 5 year old sensitivities, strong enough to make me rebellious at times (I did NOT want a doll for Christmas, I wanted a train set!) What did this little girl long for? Could she imagine making her desires felt? She was only three according to the legend on the painting.

I have sent a first draft of a poem to my editor. I am pleased that it says what I meant it to, but slightly doubtful that it’s said in the most elegant way. That’s the discipline of writing, poetry, especially – getting the best words in the best order.

Roshni has responded with such a careful reading of my piece, finding a shift of emphasis that strengthens the piece. Judging the weight of words in short poetry is a challenge, finding the best word and testing meaning against rhythm can be difficult. So I read the adjusted poem again several times, out loud too, because that’s when the rhythm tells. I read it looking at the painting to try and judge if it sounds ‘true’ of the characters. I know I will return to these paintings and write more. My poem could have been the words in the mind of the child, or the mother but, this time, I am happy with the choice I made.

I sit for the
artist, my daughter,
we chatter as she works.
How mysterious,
my lost papers,
and for me,The Secretary,
not to have my own details,
my own token.

Emma paints the mother
fine, clean and well clad,
restored to decency,
for a moment I think of
another mother, mine,
who surely hoped
to be part of the 3%,
reunited.