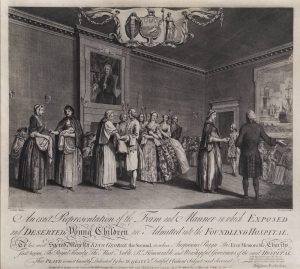 Nathaniel Parr after Samuel Wale, An Exact Representation of the Form and Manner In Which Exposed and Deserted Young Children are Admitted Into the Foundling Hospital, 1749 © Coram in the care of the Foundling Museum

I came late to the project as someone had to drop out, but said yes immediately before I could get nervous and change my mind. I loved the sound of 26 Pairs of Eyes and was already a fan of The Foundling Museum.

I used to live two minutes away, on Lamb’s Conduit Street. It’s still reasonably untouched compared to the recent destruction of Soho. If you squint and it’s misty, it could be 100 years ago on the pedestrianised part of the street. I lived opposite a florist and was woken most mornings at 5am listening to deliveries being unpacked and offers of teas being made (alas never brought up to the flat).

Despite the early morning wake up calls, I loved it. So any excuse to go back to Bloomsbury is welcome.

While living in Lamb’s Conduit Street, I started to research the family tree. I never knew my paternal grandmother but I had always wanted to know more about her. Sadly, she died before I was born. I am named after her, both of us Jessie.

I ordered Jessie’s birth certificate as a starting point, as I know this often reveals addresses in the days of home births. It arrived, and I opened it hurriedly then stopped stunned, blinking at the address: she was born two doors down from where I was sitting.

We also share the same middle name Elizabeth, which I hadn’t known. She had a second middle name Cecilia, the name of her as yet unborn sister and – by this point, it seemed somehow inevitable – the name of my flatmate. Of course.

The appeal of family research for me is discovering stories long forgotten or prompting memories in the living. Sometimes the research hits dead ends, allowing me to ponder my own interpretation of the past. The Foundling Museum is a perfect catalyst for this kind of memory making and story telling. There are so many wonderful objects within the museum to inspire and provoke response.

The piece I was paired with initially didn’t move or inspire me as much as some of the others. Then my mother sent me a song by the band The Unthanks called Foundling, which seemed to capture the essence of the museum and project so perfectly I was rendered incapable of producing anything for some time. Here is a sample line:

Foundling. I am your mother. Your absent and virtueless mother. I cast you away like Moses. But you might be saved from the tarnish of me and grow strong in this Coram sanctuary.

I encourage you to listen to the whole song if you can.

After multiple listens to the song, I revisited the ballot picture and, happily, ideas started to grow. However, I became concerned with encroaching on another writer’s theme as the image could be interpreted in many ways. All those different characters in the same room at essentially a lottery draw: an early version of reality TV. The fashionable lords and ladies of the time would watch the mothers draw the balls (red, white, or black). That would decide their babies’ fate. I wrote pieces from the various perspectives of the mother, the foundling, the person taking around the lottery, and from the perspective of a male/female onlooker.

Eventually, I settled on the female onlooker, whose character grew more vitriolic with each draft. I imagined a childless woman who wanted a child of her own. She had begun to resent her husband, blaming him for her situation and hated him going to these events for entertainment. She identified with the women in a way she could never explain to him. I imagined him as always drunk and ruddy-faced. A buffoon. The tragedy of these women juxtaposed with the wealthy onlookers is very disturbing to me.

In my own family research I discovered family members had been taken into the workhouse. I wonder if there could have been a Foundling Hospital connection too. A lot of my ancestors lived around that area, so it is a possibility.

I feel very lucky that I’ve been able to trace my family roots, getting to know family members in a way that the foundlings never could. So many of their stories will remain a mystery. I’ve thoroughly enjoyed imagining what might’ve been.

He is laughing and joking. His sweaty, bloated face red with gaiety. His laughter makes me shrink with shame. He comes here to socialise, with misery and sorrow the backdrop. A vile leech. They’ll be childless soon, like me. If I could, I would take in their babies. Treat them as my own. That’s something they could give me that he cannot.