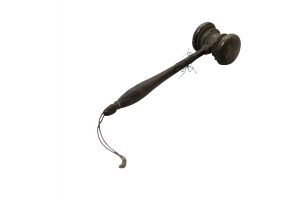 When I found out I would be writing about the matron’s mallet, I really wanted to touch it. I wanted to feel the grain of its wood. Was it smooth under my fingers? What did those ridges and curves feel like? I wanted to know the weight of it and how it balanced in my hand. And, of course, I wanted to hear the sound it made when I struck it on the refectory table. How could I write about it without knowing these things?

But I couldn’t touch the mallet. It must stay inside its glass case. So I asked questions instead: What wood is it made of? Who made it? (It’s surprisingly elegant, isn’t it?) What year did they make it? (Or even better what month – did the shavings fall through sunshine from the lathe or was snow falling?) Did it belong to one matron? What was her name? Or was it passed down from one to another, a practical badge of office? I wanted to know about the string that hangs from its handle. Was it kept on a hook in the dining room, handy for the moment in every mealtime when the children simply couldn’t keep silent any longer?

But it seems we know only that someone made the mallet in the 18th century, from the wood of a fruit tree.

The mallet was keeping silence still.

So I decided to write about what we don’t know. I began to explore how by not knowing facts, we can begin to know something differently through our imagination.

At some point I realised that when I pictured the mallet striking silence into a candle-lit dining hall smelling of mutton, the hundreds of children were faceless. I could hear them – their breaths, their clattering spoons, their whispers. I could smell them, feel them itch with lice. But I couldn’t see their faces. The children blurred into a mass, their identities washed away by time. Like the mallet, they were unknowable. They too had been uprooted, renamed, made into someone new, and though we have records of their names and details of what they became on leaving the hospital, we can’t know more than these basic facts about them.

So the poem is about the mallet, and about how in its very anonymity it is like the thousands of children who passed through the hospital.

And I guess it’s about how in time all of us – even in these days when every facet of our lives seems to be recorded – will become faded and unknown, part of the mass of the past.

And it’s about our strange obsession with objects. I wrote this poem on a trip to Greece and while I was there I visited the Agora in Athens, the ancient city’s old civic and trading area. In its museum I peered at pots, razors, burial urns, and wondered about the people who’d used them. Just as in the Foundling Museum, they were nameless, faceless. There were no pictures of individuals, no personal stories. All we know about them is through these objects they once touched.

Then I left the Agora and walked into the modern city, sat outside a café and watched the people walk by.

I thought about the foundlings, and how if I walked through London today I would surely pass children whose lives are every bit as hard as the foundlings’ were, and I would never know them either. I probably know more about a two-hundred year old mallet than I do about the children living perilous lives in my own community.

Writing the poem was incredibly hard, and not only because I don’t usually write poems. I didn’t want to invent a story about the mallet or the children it silenced, precisely because I knew so little about them: it felt important to say just that, without embellishing. To say, take an interest, look harder. So here they are, barely known, but here in the room with us.

Through glass
I run my finger along its grain,
picture the tree the mallet came from,
the fruit it bore.
I see a man cut one branch,
turn and balance it, carefully,
the better to be held in a warm hand,
the better to keep silence,
here among the hundreds of breaths
that cloud the glass
in this room of rootless children.