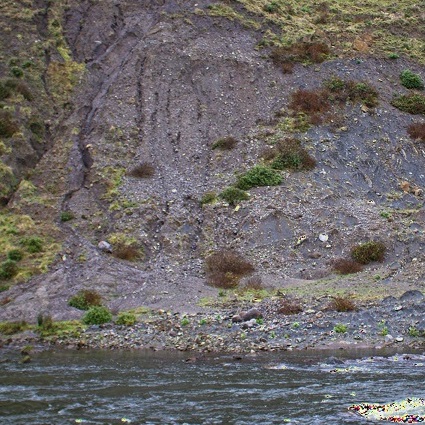 Picture this
through mud and silt,
the indoor-outdoor flow.
Ignore that space between the rocks
where willows used to grow.

Believe your ears,
no tweets nor calls.
No irritating song.
We’re confident
this environment
will all too soon
be gone.

Rapids here,
torrents there.
Rich tones of brown and yellow.
Safe for paddling, wading, rafting;
no creatures swim below.

The way we got to Gone.

How to find a way into the catastrophe that is casting a shadow across our planet. The possibility of joining hands with other 26 writers, to do just a little something to foster hope, was appealing.

Working with the 26 NZ Chapter team of Jayne Workman and Paul White we considered organizations that aligned with the UK’s Wildlife Trust. Forest & Bird were the natural choice and their response was enthusiastic.

As the eight habitat genres were assigned, I found myself with ‘Fresh Water’. I had been hoping for a habitat that would allow a connection with my creative partner Elle, who makes her home beside the Whanganui River

We talked about the ‘Awa’ (river) and its place as a highway and food source. The spiritual links that local (indigenous) Māori/people have to the river is profound. It’s been described as a feeling, a longing. It is a river that ’speaks’ to you if you let it.

Earlier this year Elle and I ran a creative workshop beside it, and it was then that I formed my relationship with the Awa. It was our job, through this project I felt, to protect it. Its threats are many, from sediment run off, misdirected sewerage, and jetboats. The chaotic balance between nature and farming.  The forest floor used to absorb most of the rainfall, allowing any excess to slowly leak into the river. Now there is no filter – the rains hit the grass land and surge into the river which can raise 30 – 50cms (over an adult’s knees) in several hours.

Elle clambered about the banks of her beloved river, photographing and sharing with me (I’m a good three hour drive away) the collected images. It was not difficult for her to capture the threats, but we took our time in selecting the three images that set up – set off the centena.

Through our research process I learned of the ‘torrentfish’, who live in the fast-moving parts of the river and play in the ‘riffles’ – a word I’d never heard of but am now ushering into my lexicon.

Interested also in the whitebait (galaxias) whose young life is intercepted by humans who net and scramble them for breakfast as part of a Kiwi tradition. As we explored we looked to the water, as the home itself, and the impact of humans on it. And I felt angry.

I often channel my anger into irony and sarcasm. My process took this form. To a contemporary view of home, habitat, property, to the world of real estate and the terminology so often used in marketing properties. Advertising puns and promises.  Plucking those and twisting them back on themselves to present the irony of the situation. It seemed only natural to introduce some trite rhymes within the verse and to bookend it with a veiled attribution to the UK tv property idols Kirsty and Phil.

I pledge to not allow the enormity of the issue subsume my efforts to do the little things every day that can make a positive difference.