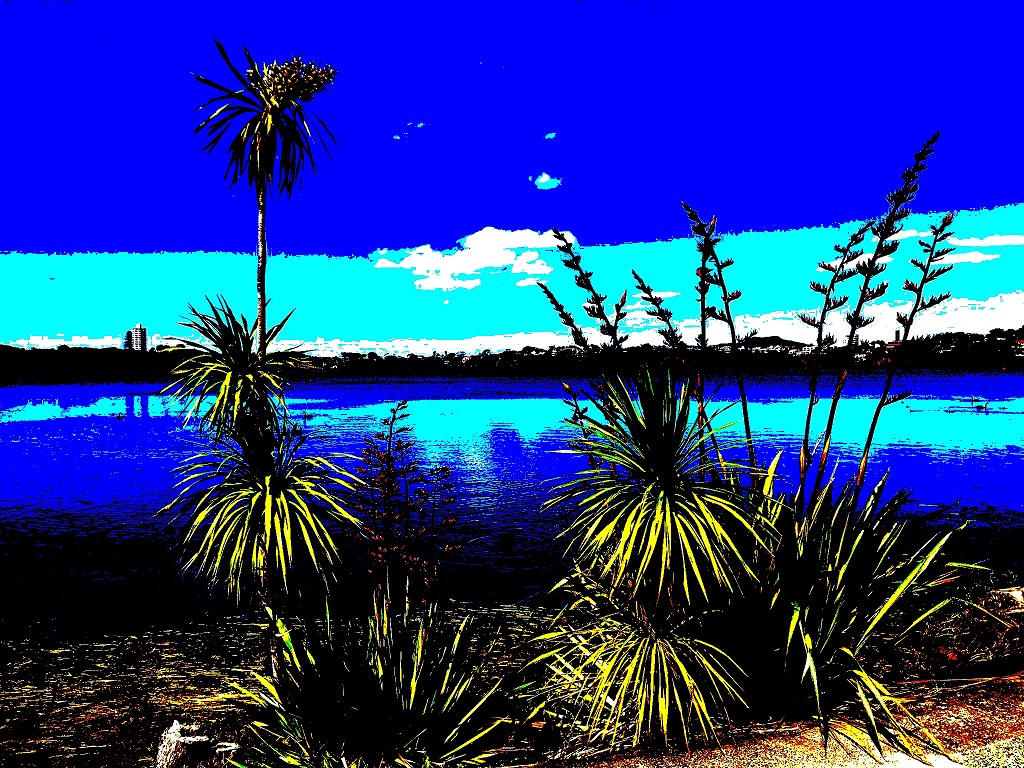 From the shore
see water.
Held by heart-shaped land,
a cradle for life,
for lives.

Formed they say after tupua – children of fire gods –
upset fire goddess Mahuika.
How dare they?

Her ire – white hot and furious,
Sated by Matahoe, god of earthquakes and eruptions.
Destruction leaving the pit for water a geographic deduction.
A lava forest left as molten rock surfaced.

A counterpoint inflection strong.
Seen from the shore.

For as long as I can remember Lake Pupuke and its relationship to Rangitoto in the Waitematā Harbour has been part of my everyday life growing up in Milford.

I passed what locals called either ‘the lake” or Pupuke daily on the way to school whether on the school bus, riding my Raleigh 20 bike, or walking.  It was an everchanging yet constant something one had to go around to get anywhere south.

It was where I learned to sail in a marine blue wooden sunburst yacht that would be towed behind my parents’ yellow Mini Clubman or the yellow Landcruiser to the boat ramp off Kitchener road in the park that was inevitably full of other little yachts, kayaks and then windsurfers.

The park was where I would walk our Airedale terriers off lead in the early days, where some young people would gather to smoke cigarettes and where picnickers would lay down mats and set up umbrellas on a fine day.

It was where corporate triathlons would take place amid merriment and business posturing.

On another level it was a site of mystery and foreboding energy.  From a young age at St Joseph’s Primary in Takapuna and then at Rosmini College there would be talk about how Lake Pupuke was dangerous.

There was talk that it was bottomless and if you fell out of a water craft and got tangled in the weeds the lake would swallow you and hold you for its own.  That alone was enough to scare me (and my siblings) to make sure we never sailed without a lifejacket, and more importantly that we never capsized.

More importantly though as I learned more about this marvellous in-the-middle-of-a-city lake I began to see it as a taonga, a treasure not just for Takapuna, or the North Shore, but as a precious item for all in Aotearoa New Zealand.

Lake Pupuke had been in the past a source of water for Auckland and the pumphouse so important to that task has been re-purposed into a theatre and performance venue.

As we recognise this aspect of its recent history under European settlement, and try to grasp at its pre-contact past we are left, or I am left, with recognising how important the Lake is on a number of levels.

The lake is a precious body of fresh water and thereby a figure that enables us to ponder care.  Care not only for the environment it sits within, but by extension care for the broader environment and naturally for each other.

Given the lake’s degraded but not irreversible state it provides us with an opportunity to think deeply about the place and space we inhabit in the natural and changing world.

Nothing happens by accident and I want following generations to be able to engage as I have with the lake, as something to go around, to walk beside, to sail on, to be with.

I’m also struck by Rangitoto which reminds us we are smaller than nature, and needing to be mindful.

Lake Pupuke is like a person needing to be cared for and I will do what I can to let that notion be known to people I engage with.