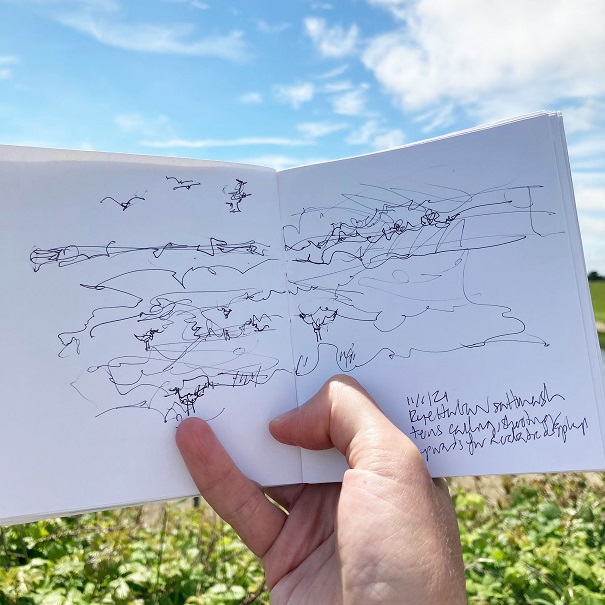 On World Oceans Day I was writing for an organisation, Nekton, that speaks for the ocean. The role of the ocean as a carbon sink is clear. We live on Planet Earth that is Planet Ocean, two-thirds covered by water. Without the ocean, climate change would already have made Earth uninhabitable for humans.

Higher temperatures melt polar ice, raise sea levels, acidify the water, destroy marine species and habitats. So we have to respect the vital role of water and not toxify it with human-made materials like plastics, chemicals and raw sewage.

Something is stirring in our relationship with nature. Perhaps the dominant species is discovering belatedly that this world is for sharing not for spoiling. I resolve, more or less. More respect, more wilding, more renewables. Less meat, less pollution, less travel.

Nature, the wilder
the better. Ordering it
about is futile.

Paired with saltmarshes, I visit nature reserves at Rye, a habitat unlike any I’ve seen before. All year the land is seasoned with salt: a flat, bleak landscape with grasses and flowers grown scraggly in the face of adverse weather. But growing, against the odds. Fresh water, wetland and sea water. Screeching birds wheel overhead, blown by a ferocious wind, swooping down to the water for respite. Sand and pebbles nudged along by tides where land and sea live together, working in partnership with each other.

There is something that lifts my spirits in this acceptance of opposites. Beauty need not be orderly.

These coastal wetlands support abundant wildlife, including migratory birds. The vegetation adapts to cope with high levels of salt. Tossed in the wind on this stormy day, the samphire, purslane, sea lavender grow in the shingle, while creeks fan out and wading birds peck at the molluscs in the mud.

One hectare of saltmarsh can capture two tonnes of carbon per year and lock it into sediment for centuries. Forever, if not disturbed. Yet we have been losing 100 hectares a year because of human ‘development’. Now a line has been drawn; Wildlife Trusts are realigning coastal zones to create new saltmarsh habitats, increasing carbon storage while naturally reducing flooding and erosion.

I will not use products that carelessly pollute our waters. Behind this is a higher pledge. To change my attitude (difficult after decades of living in a world that assumes human beings have all the rights): to accept the democracy of nature, that plants and animals have rights equal to ours. We might not achieve it but we’ll be better for asking.

We share the planet
with nature; be good neighbours
to all who live here.