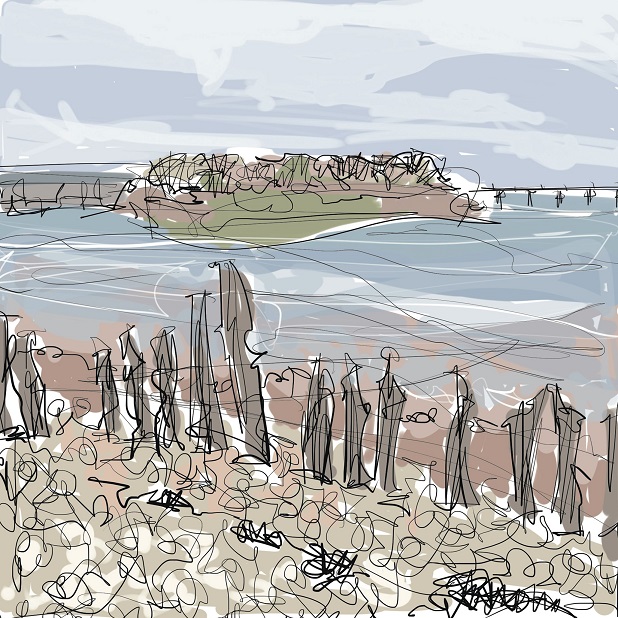 What can I do? To
lessen plastic’s flow… I buy
a litter picker

Redaction for what the salt marsh feeds

Strangford Lough is a large shallow sea lough with a wide variety of marine and intertidal habitats.

The diversity of the marine habitats is

nature is nurture is mother is father is life
is death is everything or nothing is gentle is cruel
is wild is the world around us is the future
is anyone paying attention?

A considerable number of species

assemblage of vulnerable and endangered wetland plants and animal species.

in winter over 20,000 waterfowl.
Nationally important species contribute to this overall population of over-wintering waterfowl:

for this gold from the salt fresh fringe
I’ll raise my sword, with my litter picker
do my bit on the ragged lough’s shore
out there busy around the margins

Note: This partly found poem is a conversation between the redacted text and the artist’s response (italicised) while researching salt marshes. The text is from Wetland of International Importance, Ramsar Convention, Strangford Lough RAMSAR site from the DOE, Department of the Environment for Northern Ireland www.daera-ni.gov.uk  The layout and use of negative space represent the salt marsh topography, whereas the redacted text is a reference to the ongoing depletion of natural resources.