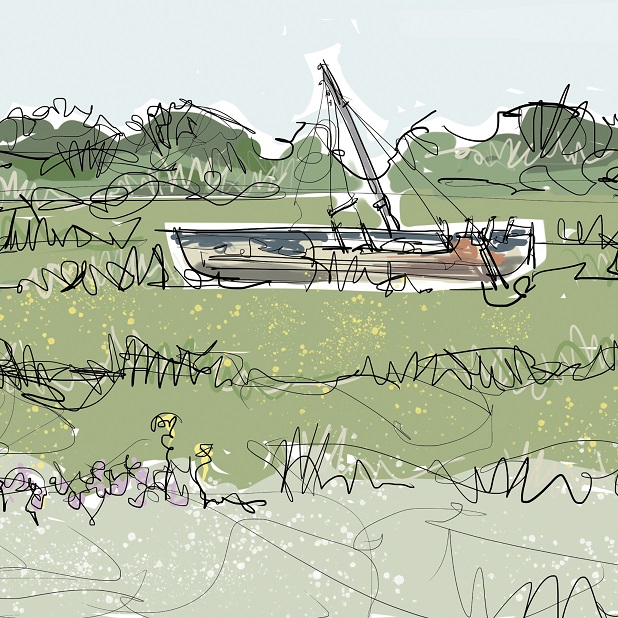 Waiting for the tide to turn

In this never-quite-land,
the green swells of saltmarsh rushes, rising
and falling with the wind.

And there, among those grassy waves,
the decaying wreck of a boat,
paint peeling, mast reeling,
in a living graveyard,
waiting on the tides of time,
earth and water.

For now they rub along together,
where samphire and purslane lay down
like wreaths and wading birds tread
among the mud and shingle
at the wake of the turning tide
bowing their heads left and right
tending to wormy pickings underfoot
bending their beaks to earth and water.

I must go down to the sea again, summoned by bells of childhood memories of schoolroom poetry and holidays at the seaside. I hadn’t anticipated nostalgia when I was first asked to write about coastal habitats. Leigh-on-Sea had been suggested and I had never been there, which seemed to narrow the scope for nostalgia.

Yet earth and water, the mingling of the two across the splashy borders of sand, make an everyseaside even of a place as different as Leigh-on-Sea. Just down the Thames estuary you can just see Southend pier, just across the water Canvey Island, the overspill places of leisure and industry for London’s Eastenders on the Essex coastline. Family places. Stand on the jetty of old Leigh-on-Sea, living off hopes and memories, cockles and mussels and whelks, one of those coastal towns caught between the tides of what it never was and what it still is.

Yet walk a little out of town and you find yourself in an alien land-and-seascape, a place like none you might have seen before. Head for Essex Wildlife Trust’s nature reserve, Two Tree Island, along the pathway that skirts the saltmarsh. Plants that live and thrive in seaspray, that rise and fall with the tides; birds that step daintily down the sand rivers that meander between the islands of long grass. It’s uncannily like a grassy ocean, an effect reinforced by the abandoned boats stuck forever in the marshland.

An information board tells you that the boat floating there, adrift yet static on the green waves, is an art project. It drew inspiration from the local tradition of wrecking boats and leaving them to decay on the marshes, physical memories of what has passed or is changing. The project Graveyard of Lost Species celebrates that tradition. “It records and acknowledges lost species – wildlife, marine creatures, microbes, people, livelihoods, mythologies and local dialects that once flourished on the Thames estuary.”

Estuary English is still derided, along with the Essex Girls, part of the same family held up to universal ridicule. Common people in a place where Common Sea Lavender is a rare and valuable plant. It sometimes seems that snobbery is the only earthly thing that is not threatened with extinction. Go and visit Leigh-on-Sea, enjoy the sustainable fish-and-chips, and notice that there is something here deeper and more valuable than easy stereotypes. There’s a wondrous but threatened environment, a haven for wildlife and rare plants, for species that might soon be lost. There’s earth and water, and that means there is life. Let’s look after it.