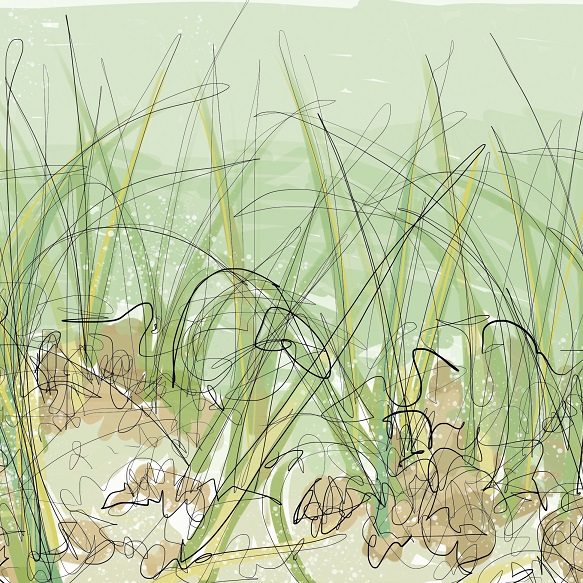 Whilst Molluscs cling to the stems
A nursery of fish swarm safely as they shelter in its base
The Seahorses freely roam, navigating swiftly through its natural beauty

Yet this aquatic world remains under threat
From pollution, mooring and anchoring boats
An underwater world once naturally created could one day become a memory of
A forgotten world

When I was given seagrass meadows as part of the 26 Habitats project, I was unsure what to expect. However, after researching the subject I was amazed at the importance of these areas and the environmental impact they have in the conservation of the natural world.

I live in Essex and have always loved exploring the different nature reserves in the area and taking in the breathtaking views. Although I have never seen or realised how incredible the seagrass meadows were, until I researched this underwater habitat.

It is easy to see why people sometimes mistakenly overlook the seagrass areas as seaweed in the water, but the role they play makes them so much more.

Evolved from grass on the land around 100 million years ago, seagrass meadows love the sun and use the sunlight to photosynthesise, which being underwater, I did not realise could happen. Not only does seagrass absorb carbon, but it accounts for more than 10% of the ocean’s global carbon storage, whilst only covering around 0.1% of the ocean floor. Surprisingly seagrass can absorb carbon up to 35x faster than the Amazonian rainforest, and at least as much carbon per hectare as trees in the UK woodlands.

There are many seagrass meadows in the Essex estuaries, including the Colne, Blackwater and Crouch. The seagrass meadows also provide shelter and protection for over 50 different species, which would otherwise be left vulnerable from the predators of the sea. These include creatures such as rare seahorses, stalked jellyfish and rare seaweeds.

Now knowing that seagrass meadows are such a crucial part of looking after the planet around us, it is a shame to find out that seagrass is so easily damaged and destroyed from anchoring, mooring, as well as trampling from walkers and bait collectors. Therefore, endangering the environment and the future of many marine creatures in Essex and around the globe.

Thankfully steps are being taken towards the protection of 2020 seagrass meadows, with the Essex special conservations now receiving much needed help from EU’s LIFE fund, Natural England and other partner organisations. These organisations have all contributed to the LIFE Recreation ReMEDIES project, which has given £2.5 million towards helping restore and protect the endangered seagrass meadows.

Together we unknowingly collaborated across the world to destroy seagrass meadows, but together we have the power to restore them. In doing this, we have the hope of protecting habitats, the environment and our planet.

Did you know seagrasses are the only flowering plants able to live underwater? Find out more fascinating facts about this essential habitat on The Wildlife Trusts’ seagrass page.