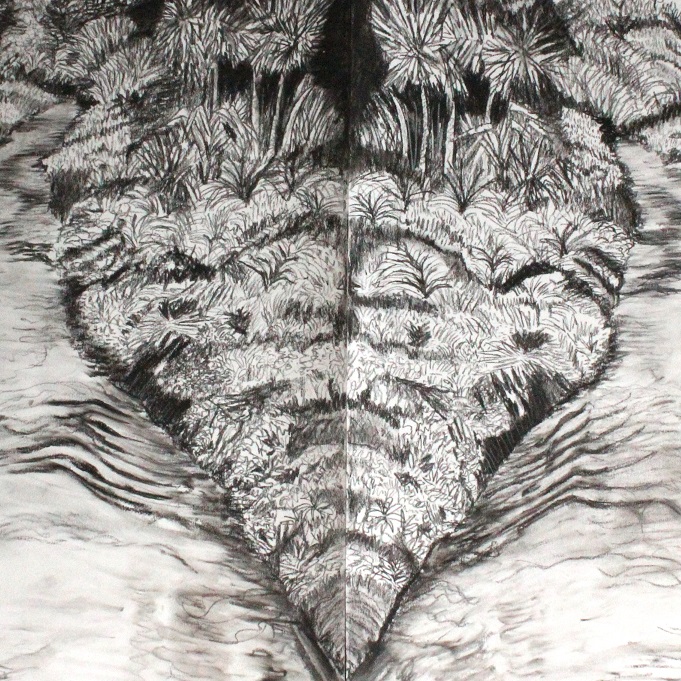 a ‘Great Swamp’ once ran

the length of this Kāpiti Coast,

down to its windswept dunes,

Fluid edges, ebbing with the seasons,

perfectly mirrored in its glimmer.

in its peaty storehouse,

protecting us, from the future

in its tiny jewelled remnants

more than all the world’s forests

As I think about the lost historic Raumati wetlands of the Kāpiti Coast, I’m reminded of a recent workshop which talked of seeing life not as an obstacle to writing, but a series of gifts. It’s about how you see things.

Wetlands once spanned the entire length of the Kāpiti Coast and beyond, a distance of 100km from Paekākāriki. For thousands of years, rain ran from the hills to the dunes, soaking deep into the land behind them, along with layers of leaves, moss and other organic fragments carried with it. The wetland became a rich storehouse and taonga for Māori who paddled its ancient watery laneways, gathering harekeke and kai. For Europeans, though, it was ‘The Great Swamp’ an obstacle to the new life they were creating. In the centuries since, it’s been drained, dried, fenced, farmed and built over so that now only 2% remains, even less than the 10% across New Zealand. Today, desirable beach communities hug the coast. Its boundary is a northbound expressway from Wellington and a commuter line carrying people to and from the capital. The little left is hard to find. I imagine it seen from above, a scattering of tiny jewels.

In June, when Claire and I visited, a dull morning had given way to a low wintry sun as we finally chanced upon the restored wetland we’d been searching for all day. Its dark glimmer perfectly reflected the sky’s blue brilliance, rows of tī kōuka guarded its edges, flurries of pīwakawaka swooping around us as we approached through mānuka hollows. The elusive wetland felt like a secret finally told.

The day I started writing, the most urgent IPCC report yet hit the headlines, we saw a woman clutching her heart, as a wall of fire engulfed her home on the Greek island of Evia, Radio New Zealand reported the draining of another large wetland near Te Anau. That evening, I spoke to Russell Bell, a key figure in the Kāpiti wetland restoration, he likened dried peatland to a boiling furnace, releasing 29,000 tonnes of stored carbon per hectare per year. Rewetting, a relatively straightforward and cost-effective process, he explained, not only turns it off, but sucks carbon dioxide out of the air too, two tonnes per hectare per year, 35-57 times faster than a tropical forest. After such a day, these numbers gave me hope.

With their power to sequester carbon, to cool, filter, clean, absorb and protect, in their role as habitat for rare native birds, fish, invertebrates and plants, wetlands are our super-power, a precious gift be treasured, not an obstacle in our way. They are the way. As Robert Macfarlane says, some landscapes “…live on in memory long after they have withdrawn in actuality, and such places…are among the most important landscapes we possess.”

Kaitiakitanga: to make an impact on climate change by finding a local wetland project and donating my time and energy to restoring it to full health.

One thought on “Wetlands”