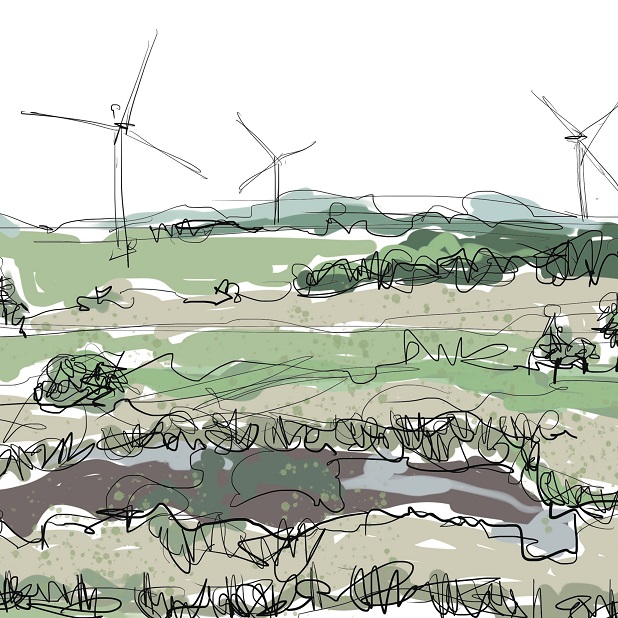 In Japan, the frog is considered a symbol of good fortune. Travellers wear frog amulets

as signs of their safe return home

Frog, where will you crawl?
When air chokes and the land dries
And the bog is gone?

In October-November 2021, COP26 (the 26th Climate Change Conference of the Parties) comes to my home city of Glasgow.

Already discussions centre on the politics. Will the climate become yet another part of the endless debate about independence?

Twenty miles north of the city, and less than ten miles south of it, lie Flanders Moss and the Eaglesham moor. I know them both. They are peatlands: acres of deep, watery bog that, at different times, have been tilled, drained, burned or blanketed in forest. Sucked dry, in other words, by human ‘improvement’.

I wish these places could be left alone. They support precious ecologies: owls, brown hares, insects, frogs, snipe, curlew, bees and the increasingly rare adder… so rare now, that one is almost never seen. Cotton-grass and sphagnum moss grow over the black pools, absorbing and enclosing the water, holding it in.

These waterlogged worlds fascinate me. They are deep, black sinks, absorbing carbon from the air and storing centuries of emissions under their surfaces. But 80% are damaged, eroded by agriculture, grazing and forestry. And they are shrinking, starting to release their lethal loads as the peat dries and the earth warms.

I love to walk on Eaglesham plateau between the turbines. There are over 200 of these windfarming giants up there, their blades swishing the air. And there are walkways, bike trails, car parks, a visitor centre and a little museum – dedicated to the Covenanters, the persecuted religious sect who once held their forbidden ceremonies there.

Restoring this land is part of the Scottish government’s plan to repair this priceless resource. Diggers move on wide tracks, scooping up ancient tree-trunks, the ground rippling like water as they tear out the roots, and flip them over. Then they push them down again and compress the peat, squash it down on top, layer on layer.

But is it the right thing to do? The work scars the bog’s surface and increases carbon emissions. Wildlife disappears. It’s two years before the moss returns. Meanwhile the world heats. Is our chance gone?

To me, any bird, animal or insect here brings hope. But to the Japanese, luck comes with the tiny frog. So my pledge is this: these marshes, hills and the distant sea is my home. I’ll walk over it with my eyes on the ground, looking for that crawling movement ahead – or plop! It will be gone.

One thought on “Peatland”